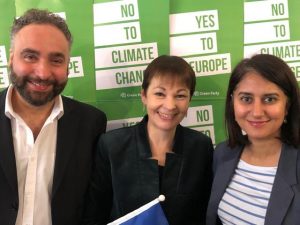 The Greens launched their European Election campaign on Wednesday 8 May just one week after the tremendous success of the recent Local Elections where we more than doubled our number of councillors.

In London our lead candidates are Scott Ainslie, Lambeth Councillor and tireless defender of community council housing and  Gulnar Hasnain who was part of the City Hall team who set up the world’s 1st City Climate Change Action Plan.

Scott says of this campaign  ‘We are the most credible Pro-Remain party on the ballot – proudly European: with a real, long-term plan for the Climate Emergency. Where Greens lead, others follow: in 2015, we were the only party to stand on an anti-austerity platform; in 2016, our MP, Caroline Lucas was the first to call for a People’s Vote on the final deal. Greens are the cure for the sickness in our politics unleashed by the Brexit project.’

By 14 May the Britain Elects Poll showed the Greens polling higher than the Tories for the first time in our history!

You can find out more about our EU candidates here.  Check our events page for news of campaign actions here and donate to our election campaign fund here.