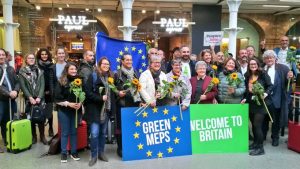 MEP’s from across Europe were given a warm welcome by the Greens when they arrived in London on 14 October to show solidarity with their British colleagues at this chaotic time of Brexit uncertainty. But following a Stronger Together 4 Climate event they saw for themselves the UK’s democratic deficit when MEP for West Midlands Ellie Chowns was arrested as she joined Extinction Rebellion campaigners in Trafalgar square in defiance of the Metropolitan Police’s sudden decision to suspend the right to protest.

Molly Scott Cato, Green MEP for the South West and Gibraltar said about the ban ‘This feels sinister. We must resist’ and London Assembly member Sian Berry said ‘You can’t just sweep away our human rights across a whole city. And if your house is on fire, don’t outlaw the alarm!’. 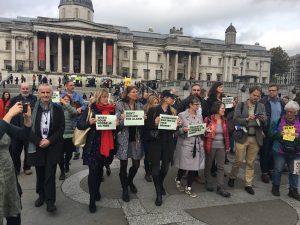 Greens are now calling on the current Mayor of London to defend the human rights to freedom of expression and assembly, and for him to demand an end to the London-wide ban.